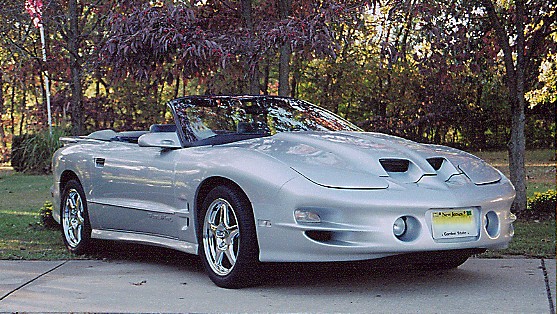 Recently there has been an increasing number of F-Body owners who decide to take the leap and convert their 93-97 front end into the more desirable 98-02...and I can now add my name to that list.

In my research prior to the start of this project, I found that there was a sparse amount of information on the web regarding such an undertaking.  Now that I have completed the project with success, I decided to create the type of page I would like to have seen before I began.  Hopefully this page will assist some fellow F-Body fans in their quest to convert.  Please note that one of the goals of this project was to do the conversion for the least amount of money possible.  The base vehicle that we used was a 1995 Pontiac Trans Am Convertible.

Preliminary Phase:  Acquiring the necessary parts
If you want to keep costs down, which I imagine most everyone does, give yourself plenty of time to find the necessary parts prior to the time you want to begin your project.  Over the span of a few months, you will be able to scour flea markets, swap meets, salvage yards, and local classified ads for bargains.  The Internet and online auction services are also huge assets.  In my experience, junk yards had nothing I needed, and if they did, they wanted too much for it.

When purchasing parts for your project, it can become frustrating as your bill goes up and up in price... But remember, once you have completed your conversion, you can easily sell your old parts and make a good portion of your money back.

Here is a list of parts and prices I used for the conversion of my 1995 Pontiac Trans Am Convertible:

Phase One:  Disassemble Stock Front End
This was undoubtedly the easiest phase of the project.  Make sure to mark the bolts with their original location...you will reuse some of them.  When disassembling the front clip, I found it best to start by taking off the bottom plastic trim and air dam from under the front clip.   Remove the plastic inner fenders to gain access to the back and front fender bolts...then remove the speed nuts that hold on the ground effects.  Once you unbolt the front of the fenders from the front clip, the front clip is easily removed.  Once you have the front clip off you can then gain easier access to the front head light assembly.  The front headlight assembly is removed as a one piece unit.  When all of these items are removed, then you can begin the second phase of the project.

Phase Two: Mounting New Head Lights
When I began this project, I thought that the head lights would be the hardest parts to mount.  However the upper and lower bolt holes lined up and put the new headlight assemble in the correct location.  I only had to slightly modify the side mounting points by drilling and re-tapping bolt holes.  The stock 1995 wiring for the headlights and motors are two separate and different plugs, while  the newer 1998 headlight assembly incorporates a single plug for both the headlight motor and head lights.  You could just cut and splice the wires together, however I decided to cut off the plugs and install flat 3 terminal weather pack connectors (which we offer for sale on our site).  This makes for a much cleaner and professional install.  I suggest that once you get the headlight assembly bolted in you, manually open and close the flip up lights.  This can be accomplished by taking off the motor's protective rubber boot and turning the plastic nut on top.  This will allow you to check for clearance problems without ruining the headlight assembly.

The first two pictures show the stock 1995 head lights.  The third picture is of the one piece headlight assembly removed from the car.  The forth and fifth pictures are of how the new fully assembled headlights will look once installed.  I acquired this picture from a local car dealership when I was doing my research for the project.  The last picture is of the assembled drivers side headlight assembly.

Phase Three: Mounting the Fenders
The fenders were an exact fit and bolted up to the stock locations.   If you have ever looked at the fender on a 1995 and 1998+ Firebird, you may think that the fenders look the same, however the 1995's are about 3 inches longer to compensate for the elongated front end of the 1995.  Thankfully, the contours of the two fenders are identical to that of the doors, so there is no need for any body work to get the newer fenders and the older doors to line up.   The new fenders also did not come with provisions for the ground effects so you will need to measure and drill holes if your vehicle has ground effects.

Phase Four: Mounting the Front Clip
This was the most time consuming part of the whole project.  The front clip of the 1995 is much longer than the clip of the 1998+, therefore, the 1995 foam impact absorber is also much longer.   In an effort to keep costs down, I decided to reuse the stock absorber, so I had to modify the stock absorber to fit.  After many hours of cutting and fitting, I was able to get the foam to a shape that not only supported the front, but also allowed it to mount to the correct location.  If I had to do it over, I believe that I would have just purchased the new absorber.

Phase Five: Repositioning the Fog Lights
Since the front clip of the 1995 was longer, that also meant that the fog lights were positioned further away from the car.  They were in the correct location on the X and Y axis of the car, so that did make installation much easier, but they did need to be moved back about 3 inches to allow installation of the front clip.  I found that the easiest way to accomplish this was to measure the distance back the lights needed to be, then remove the material needed from the center of the bracket.  Finally, weld the two pieces together, thus making the brackets shorter but still retaining the original bolt holes.

Phase Six: Fabrication of Front Clip Mounting Points
The 1995 stock headlight assembly is a single unit in which the stock front clip, as well as the stock front hood bumpers bolts to the center of.  Since you are replacing this type of assembly with two separate assemblies, you now need a place for the new front clip to bolt to.  You will also have to relocate the mounts for the hood bumpers to give the hood the necessary support.  The stock headlight assembly only had one headlamp and was much shorter than the newer two lamp assembly.  If I retained the stock metal bracket (see first picture below)  that the hood bumpers mounted to, it would interfere with the operation of the head lights.  I solved this by heavily modifying the stock metal bracket so that it not only supported the hood, but also retained the right and left front clip mounting points (see last picture below).  To solve the problem of the center mounting point,  I fabricated a simple boxed in steel mount that was bolted to a bracket which was originally used to retain the stock 1995 headlight assembly (see third picture below).  The second picture below show the relation of the new head light assembly with modified stock metal bracket.

Phase Seven: Mounting the Ram Air Hood
We decided that for this project a stock ram air hood just wasn't going to give us the look we were after, so we decided to go with the SLP Raptor Style Ram Air Hood.  I was very impressed with the quality of the fiberglass hood from SLP compared to other hoods I had researched.  As per SLP's directions, I test fit the hood and discovered that the front did require some shaping to obtain a nice clean line.  As you can see in the pictures, I didn't have to remove much material, but it definitely makes for a much cleaner appearance.  The tools I found best for this were a round rasp file and a straight file.  Just be careful not to remove too much material.

Phase Eight: Mounting the Inner Fenders and Miscellaneous
Luckily the mounting locations for the inner fenders are the same for the old fenders as they are for the new fenders.  I then mounted the new clear turn signals using the same hardware from the old turn signals.  The only other parts needed to button up this conversion was the reinstallation of the lower air deflector and the trim for the underside of the bumper.  The air deflector did not need to changed and I was able to reuse the old trim for the underside of the bumper.  The right and left trim pieces only required that I re-drill slightly offset mounting holes to mount them to the new front clip.